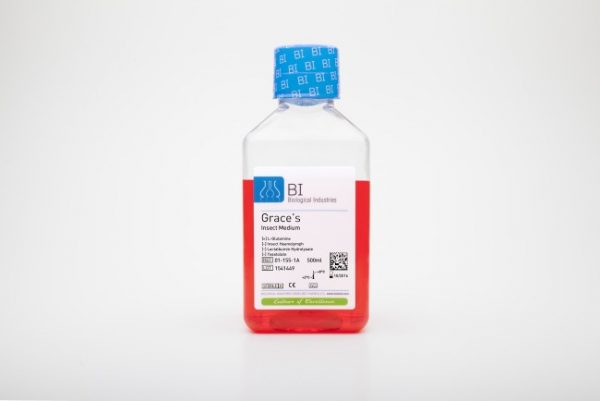 BIOINSECT-1 SFM
0 out of 5
( There are no reviews yet. )
Grace’s Insect Medium for growth and maintenance of insect cells in culture such as in Dipteran and/or Lepidopteran cell lines.
SKU: 01-155-1A
Category: Specialty Media
FacebookTwitterLinkedInGoogle +Email

Grace’s Insect Cell Medium with L-Glutamine, when properly supplemented, can be utilized for growth and maintenance of insect cells in culture such as in Dipteran and/or Lepidopteran cell lines. It has also been successfully used on a variety of other insect cell types as well as for the production of recombinant proteins via the Baculovirus Protein Expression System (BPES).

Grace’s medium was originally developed almost half a century ago to support the growth of the Australian Emperor Gum Moth (Opodiphthera eucalypti) cells. It is a modification of Wyatt’s medium which was formulated to resemble the biochemical profile of hemolymph from Bombyx mori (the Domesticated Silkworm Moth). Grace was the first to establish continuous cell lines by using this medium.

The complete formulation is available.

Be the first to review “Grace’s Insect Medium” Cancel reply